A Race to Rent for Metro Denver’s Rental Market

8 years ago
Kelly Robertson
Denver Property Management, In the Community Real Property Management was recently interviewed by The Denver Post about the strains taking place on Metro Denver’s rental market. Due to the high demand, rentals are being snatched just days after being placed on the market, leaving Denver’s rental market a race to rent each new property. Take a look at the full article here:

Metro Denver’s constricted housing market, which has squeezed buyers since early 2013, has begun to wrap its coils more tightly around renters.

Higher home prices and quicker sales times have resulted in a larger number of landlords cashing out, leaving fewer homes for lease and pushing up rents.

“As soon as properties are put online somewhere to rent, they are gone,” lamented Denver resident Caroline Grote. “It is a seller’s market and it is a landlord’s market.”

Grote was one of about 16 people checking out a two-bedroom rental at 673 S. High St. in Washington Park on Thursday. The 834-square-foot home was going for just shy of $1,500 a month.

“We had to take them through in groups of 10,” he said, noting that large crowds at showings, multiple applications and shorter turnaround times on vacant units are now common.

In the push to get ahead of the competition, more renters are submitting applications without seeing a property, a strongly discouraged practice, said Lisa Krier, the company’s director of leasing.

Alex Thompson and Anna Feest were among those eager to get a rental application in on the Washington Park home. The couple, who now live in a triplex, want more storage space and a yard for their dog.

Every time they thought they had found a house to rent the past month, they quickly learned it was no longer available.

“This is the first place we got to see without it already being rented,” Thompson said.

Real Property Management Colorado started the year with about 1,600 homes in its portfolio and is now down to 1,300, co-owner Jeff Bacheller said.

“Investors are selling like crazy,” he said. Many of those selling are “accidental landlords,” homeowners trapped by the housing downturn who decided to rent rather than sell at a loss.

The resale market has moved strongly in their favor again. Metro Denver’s inventory of homes for sale in June was a low 7,458 and homes on average were only taking 27 days to sell, according to a report from Coldwell Banker.

That contrasts with 10,438 homes for sale and an average turnover time of 35 days in June 2013, which back then was considered an abnormally tight market.

Back in June 2011, when the housing market was still soft, there were 24,172 homes for sale and listings took 91 days to sell on average in metro Denver, according to Coldwell Banker.

Exacerbating the tight inventory is metro Denver’s ongoing popularity with young adults from other states. More people are also moving out on their own as the economy improves and unemployment drops.

“If you want anything other than your standard apartment, inventory is miserable,” said Ron Throupe, an associate professor at the University of Denver’s Burns School of Real Estate and Construction Management.

The vacancy rate on rental homes was running 1.4 percent in the first quarter and in pockets such as Douglas County was at 0 percent, said Ryan McMaken, a former Colorado Division of Housing economist.

That contrasts with a tight 4.7 percent vacancy rate in the second quarter for apartments in metro Denver. But the inventory of apartments — unlike single-family homes — is expected to surge as developers place thousands of new units on the market in coming months.

Steve Bacheller notes that the company’s rental homes are turning over in under two weeks once they hit the market, compared with more than three weeks last year and a month in a more normal market.

Throupe compared the desperation of renters looking for single-family home to mice scrambling to find cheese that isn’t there. Many renters, he predicts, will be forced into apartments.

But some renters prefer homes to apartments because of the greater privacy they provide and their lower cost per square foot, not to mention having a backyard for the kids and pets.

Throupe’s advice for those who absolutely must have a house: Try to buy one.

“My answer is to get a night job and save enough to get a down payment,” he said. “Get out of the rat race.”

Although rents are rising, Steve Bacheller notes that landlords can’t name their price. Properties that are too far out of line with the market won’t rent.

The shrinking number of homes to rent has also put pressure on property managers as well, pushing smaller players out of business.

Krier expects the rental market will ease up a little as the peak home-selling season tapers and landlords wait for the next selling window.

But that is little consolation to renters who need a home now.

Grote, an Ohio transplant, has to vacate her home by the end of the month because her landlord, who was living in California, is moving back.

“It is very crazy,” Grote said of the race to find a home. 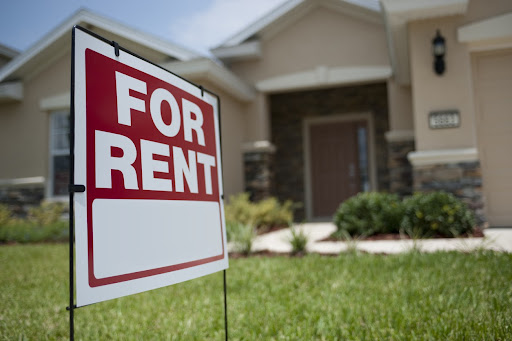